SPONSORED CONTENT – For centuries hemp has taken a backseat as marijuana gained all of the attention for its medicinally-charged benefits and psychoactive characteristics.

It’s almost a classic tale of Cinderella; the sisters were glorified for their dazzling appearance and slight sign of wealth, while the more humble step sister waited for just the right moment to shine. Throughout the existence of cannabis, hemp has played the same role as Cinderella, and now it’s receiving its fairy tale moment due to the 2018 Farm Bill.

The Agricultural Improvement Act of 2018, otherwise known as the 2018 Farm Bill, was the “royal ball” and the government, believe it or not, was the knight in shining armor in this fairy tale story. At last, the plant of the family Cannabaceae who was never given the time of day (other than the time when the Government relied on hemp farmers during the second world war, only to eventually turn its back on them and include hemp as a Schedule 1 Narcotic under the Controlled Substances Act in 1970) is now glistening with beauty thanks to the CBD-rich plants.

While hemp certainly is medicinally-charged like its close relative, marijuana, it doesn’t quite contain the same psychoactive characteristics… or so we thought.

Up until recently, both manufacturers and consumers were completely oblivious to the fact that hemp contained a very special cannabinoid, Delta-8 THC, that contained medicinal qualities and the missing psychoactive characteristics that made marijuana so popular. However, Delta Effex knew there was yet another gem that makes this Sativa princess (get it? because Industrial Hemp is female) so spectacular.

We promise that is the last Cinderella analogy you’ll see. Makes sense though, right?

Delta Effex, a California-based brand under the umbrella of Savage Enterprises, is propelling the hemp market forward by using Delta-8 THC. It is a rare, powerful cannabinoid that is an isomer of CBD, a derivative of hemp and CBD, and ultimately a cannabinoid that is found in hemp. Though it is known hemp is non-intoxicating, Delta-8 only differs from Delta-9 THC (the famed psychoactive cannabinoid found in marijuana) by a few atomic bonds, making it a unique cannabinoid within the plant, yet close in relation, that offers its own potent high.

Since hemp was made federally legal, CBD became the height of its potential and the market fell stagnant. While CBD may come with a gift of benefits, the mind-altering effects do not exist. This filled the cup for many users while leaving others with a feeling that something is still missing. Delta Effex views the Delta-8 THC cannabinoid as common ground, somewhere in between CBD and Delta-9 THC.

“It’s almost like taking CBD and you physically feel it working within your body.”

Delta Effex is propelling the hemp market forward by introducing this incredible cannabinoid to a broad audience. They are dedicated to producing the industry’s finest Delta-8 products, delivering exceptional quality, extraordinary potency, and coupling it with innovative equipment to deliver sheer performance. It became the industry’s latest ‘buzz’ when it launched the first of many to come products, Delta Effex Delta 8 Cartridges, which took the market by storm. Continuing to push the market forward, the brand is set to launch its premium Delta 8 THC Pods soon. 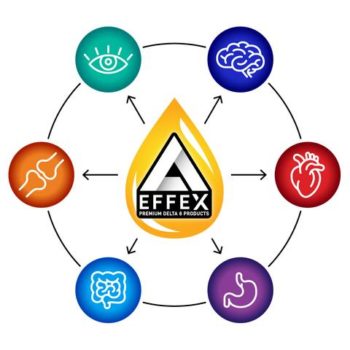 How To Make Vegan CBD Butter

Changing Of The Seasons: How Outdoor Cultivators Prepare For Various Crop Threats

US Weed Brand Opens Its First Lifestyle Store in Spain

CBD Extract Oil: What to Know Before Buying